Working under strenuous conditions, para-rescue jumpers and their command-and-control centers require swift, dependable modes of communication to provide status and patient updates, as well as critical mission information. The California Air National Guard 131st Rescue Squadron had tested and deployed a variety of personal communications devices, but none of the other options were able to adequately handle the data and connectivity needs of the squadron during missions, especially outside of cellular range. 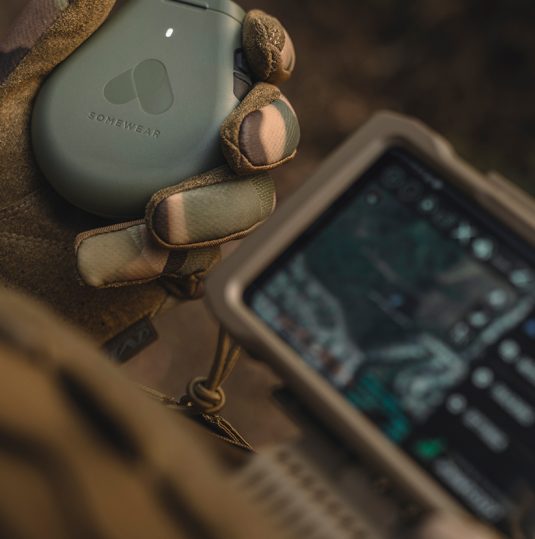 To find the right solution for their mission set, the rescue squadron worked with Somewear Labs, an Iridium Value-Added Manufacturer, to assess the viability of using the Iridium Connected Somewear Global Hotspot, a small, lightweight personal communications device, on search and rescue (SAR) missions. The 131st rescue squadron, as well as other SAR teams, conducted extensive testing of the product to prove its reliability in the field for these critical life-or-death scenarios. The device is built to send and receive data through the most efficient path, leveraging Wi-Fi and LTE when available and automatically connecting to the Iridium network when LTE coverage is unavailable, as the Iridium network works anywhere in the world, even in adverse weather conditions. When paired to a smartphone, the Somewear Global Hotspot enables critical situational awareness software including the Somewear Mobile App and ATAK, software already familiar to the SAR operators. This meant the team was able to quickly deploy the new devices and immediately feel comfortable operating them.

After months of experimental testing, the squadron took the device on its first rescue mission: an evacuation of an injured person on a freighter ship 1,200 miles off the coast of California. Equipped with a Somewear “puck”, a deployed PJ jumped out of the plane, landed in the ocean, and swam to the vessel. When he reached the injured crewman, the PJ was immediately able to use the hotspot to communicate patient vitals directly to both C2 headquarters and the doctor who would eventually receive the patient in California, a feature that was previously unavailable to the squadron using other personal communication devices.

The command center, operators, squadron members, and even the rescue aircraft were equipped with the Somewear device and software onboard. The entire team was able to communicate via messaging about plans without interruption. The Somewear device enabled effective, clear and successful collaboration among all parties, allowing real-time decisions to be made that helped ultimately transport the injured individual safely back to California in stable condition. Additionally, the squadron leader estimated that the entire rescue operation took half the time it normally would because of the increased level of situational awareness for everyone involved.

The Somewear personal communications device provided unique advantages to the rescue squadron during their mission. Unlike other satellite communications providers, Iridium provided reliable visibility for the PJ, SAR team, and medics into important details of the mission, including aircraft ETA and patient status. This allowed the full team to clearly track the helicopter, understand evolving patient needs, and make an informed rescue plan, ultimately making the rescue more efficient.

Regardless of the environment, as long as the rescuers had the Iridium Connected Somewear devices, they had connectivity.  The Somewear Labs Global Hotspot bridged the gap between lightweight, wearable personal communications and devices powered by Iridium’s network. Enabling a connection outside standard LTE cellular coverage without an expansive infrastructure, the Iridium Connected device allowed the rescue squadron to feel confident in any situation and save lives faster.

Iridium was a clear winner when it came to the ability to develop a small form factor device with low latency on a robust network. We wanted to build something you can trust your life on, and if we were going to stand by that promise, it had to be Iridium.

Somewear is committed to continuing its support of both SAR organizations and backcountry explorers through Iridium Connected technology. The team is identifying opportunities to increase the applications on their current platform through further integration and additional product development leveraging the power of new Iridium services in the future.

Get In Touch With Our Team