When reading about Iridium, you may have noticed that the phrase “hosted payload” has been popping up a bunch, especially when talking about our recent Iridium NEXT launches. But what exactly does that mean, and why is it so important?

First things first – what is a hosted payload? The Hosted Payload Alliance, a satellite industry alliance designed to bridge government and private industry, defines a hosted payload as: “A portion of a satellite, such as a sensor, instrument or a set of communications transponders that are owned by an organization or agency other than the primary satellite operator [Owner]. The hosted portion of the satellite operates independently of the main spacecraft, but shares the satellite’s power supply, transponders, and in some cases, ground systems.”

This model is becoming increasingly popular because of its benefits to both the satellite host and the hosted payload owner. The host (like Iridium), benefits from expanded capabilities by upsizing at a lower cost, savings from cost-sharing, and additional revenue opportunities, among many others. Meanwhile, hosted payload owners reap many benefits too. Namely, they can get into space quickly and less expensively since they do not have to develop an entire satellite system.

Here at Iridium, we have a long history with hosted payloads. Our original constellation, known as Block 1, hosted the Active Magnetosphere and Planetary Electrodynamics Response Experiment (AMPERE) program for years. Although Block 1 was not originally designed for hosting payloads, the constellation accommodated secondary missions using existing sensors on the satellites. The AMPERE sensors monitor space weather data in real time, enabling high-quality forecasting of space-based solar storms that can disrupt aviation and terrestrial telecom and satellite systems.

Seeing the benefits of a hosted payload partnership in Block 1, we specifically designed our new, second-generation satellites with a hosted payload opportunity in mind. The satellites currently being launched through our Iridium NEXT mission program were built to host an additional 50 kg payload from the start, a unique accommodation. 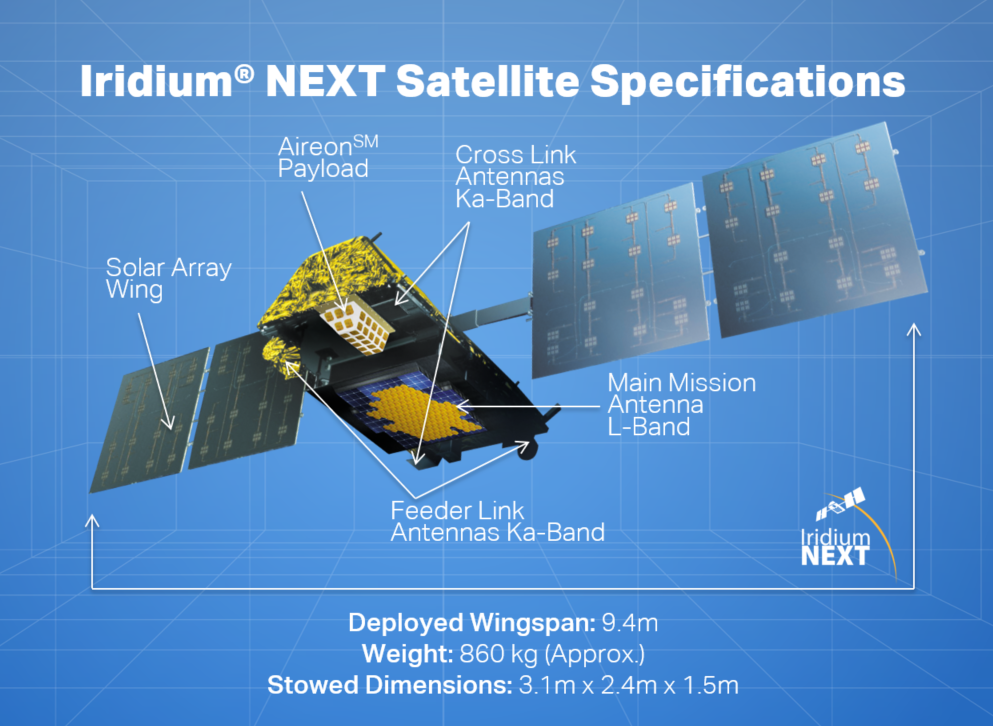 In 2012, we announced Aireon, a joint-venture that would provide air navigation service providers with the capability to track aircraft anywhere in the world in real time, including the only coverage over oceanic, polar and remote regions. This announcement also revealed that Aireon’s service would use space-qualified Automatic Dependent Surveillance-Broadcast (ADS-B) receivers built into each of our 81 second-generation satellites (66 in the operational constellation) to deliver its transformational capabilities.

Providing these services is essential to Iridium’s business functions. Through strategic partnerships, Iridium has been able to and will continue to provide unparalleled services to people and organizations across the world. The future is bright for Iridium, Aireon, and all other partners involved with these revolutionary hosted payloads!