Earlier this year, The Ocean Cleanup went viral in the news and on social media for its ambitious goal to rid the world’s oceans of plastic garbage and perform the largest ocean cleanup in history.

The Ocean Cleanup has created a system of 600-meter-long floating plastic collectors that include a 3-meter-deep skirt designed to collect plastic pollution. Through a combination of the wind, waves, natural ocean currents, the system is able to capture waste and prevent plastic from escaping underneath or flowing over the top, and can avoid harming sea life.

“Over 5 trillion pieces of plastic currently litter the ocean. Trash accumulates in 5 ocean garbage patches, the largest one being the Great Pacific Garbage Patch, located between Hawaii and California. If left to circulate, the plastic will impact our ecosystems, health and economies. Solving it requires a combination of closing the source, and cleaning up what has already accumulated in the ocean.”

On the heels of System 001’s launch in the Pacific, Iridium announced participation in the project as the preferred provider of satellite communications for The Ocean Cleanup. We are working with The Ocean Cleanup team and one of our value-added partners, The AST Group, to support the cleanup mission with Iridium® L-band satellite broadband services. 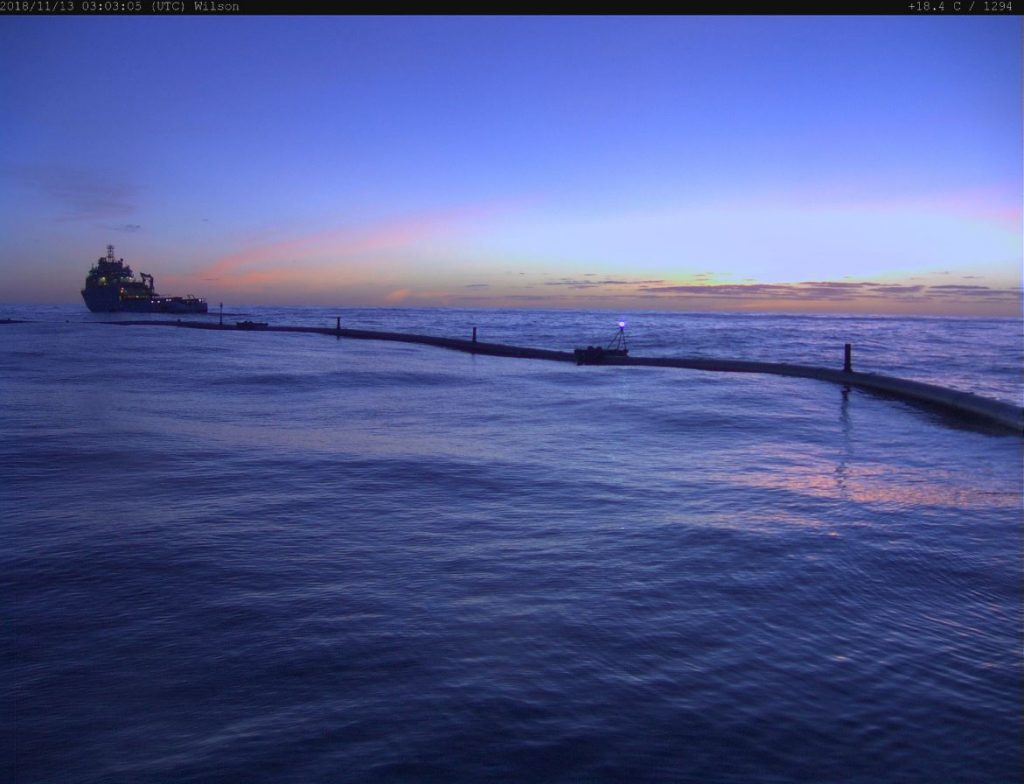 “Wilson” is equipped with two Iridium Pilot® terminals providing the Iridium OpenPort® broadband service, which allows the autonomous system to relay critical systems data back to the team in Rotterdam, including compartment flood detection, position and location information, pictures (like the one to the right), 360-degree video, and system performance information. As The Ocean Cleanup team scales up the project to 60 systems, Iridium and AST will continue to support the mission with terminals and service, and plan to begin providing Iridium CertusSM hardware and services once it becomes available.

For more information about The Ocean Cleanup, visit www.theoceancleanup.com. Check out the video below to learn more about Iridium’s involvement in the project!