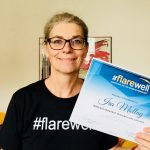 Two years ago, I barely knew what a satellite was, did not care about the space industry and was angry at Iridium: I had found out that they would take my beloved Iridium Flares away. But then I was hit by the “Iridium Effect”. It led me to fly across the Atlantic for a visit at Iridium headquarters and the SNOC.

When I was asked to write a blog article about my visit, I gladly agreed and thought it would be easy. But while writing it up, I realized that it can’t just be a short piece on what happened on that day and how I got to chase Flares; Iridium is about so much more to me, and woven into so many aspects of my life that I am afraid I will have to provide some padding around the story of my visit.

Iridium Flares became a passion of mine in 2012 after I had serendipitously learned about them at a dinner party. I needed to find out how to spot them. Soon after, I did not let a single opportunity pass by to see one of those beautiful shining wonderworks that touched me so deeply. But I took no interest in why and how the satellites producing the Flares had got up there until I accidentally learned that the constellation would be replaced. This did not go down well with me: If you want to learn how I went from hating Iridium because they would take my beloved Flares away to becoming one of its most ardent fans – despite them taking my Flares away! – you can find my whole confession in this blog article!

Spoiler alert: I came across an article in Wired published in 1998 that talked about the technical marvel that those satellites were, about their unique ability to reach every single spot on our planet, about a pan-national organizational structure and a lot of other fascinating aspects. Suddenly, I saw those glinting Flares in a much larger context, which made them even more interesting.

Two years ago, I would have assessed the possibility of being in the same room with a satellite person as close to zero. Why? Considering my background, the satellite business is more than far-flung from my beaten track: A graduate of business administration and economics, I started my career in capital markets and corporate finance, and soon changed course towards sustainability, briefly heading a major Austrian NGO in this field. Facilitating positive change became my focus in the roles of personal coach, consultant for organizational and human resource development, as well as in a current assignment as organizer of a local community in Vienna. And most of all, as the founder of an association that showcases and promotes positive solution-oriented game-changing initiatives and approaches. Within this context, I also train individuals and teams in science-based techniques to increase positivity. In a nutshell: What makes me tick is everything that tries to make the world a better place, every attempt at a solution, every positive vibe, every first step that is taken in a good direction which might prompt others to follow.

So what makes a company that is in the wholesale business of satellite communication as much ”fan material“ for me as a football club, a movie star or a boy band might for someone else? Here’s what helped me, what influenced me and what resonated with me when it comes to Iridium: 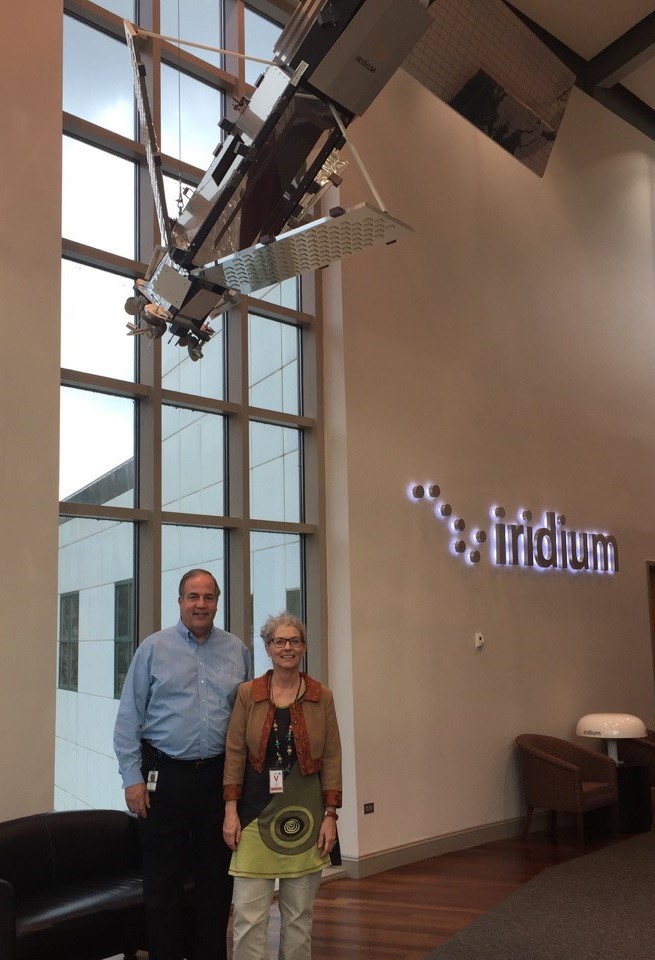 A major contributor was (and still is!) Matt Desch – aka @IridiumBoss – whom I started asking questions about orbital maneuvers on Twitter. I always got answers from him, which motivated me and kept encouraging me to educate myself about the basics of orbital mechanics. With every new Iridium® NEXT launch, I entered new territory, improved my own ”mission control center“  – that is all the spreadsheets and lists that I have drawn up and work with on a daily basis. Since I have no technical or scientific background, I have to derive all my conclusions from finding patterns and following my curiosity. There is no curriculum for this, so I have to rely on Matt’s responses, which are not only a source of information for me, but also a strong motivation and a kind of mentoring.

This brings me directly to what I mean by the “Iridium Effect”. When I think about what makes the essence of Iridium, it is like a specific “frequency” that I picked up. It not only resonates with me, but has rubbed off on other aspects of my life:

As I learned more and more about Iridium, I continued to ask a lot of questions of @IridiumBoss, which led to an invitation to visit to the Iridium headquarters and Satellite Network Operations Center (SNOC) where I could ask the experts directly…I was absolutely thrilled and said yes!!

So here I was … The first part of my visit at Iridium was a meeting with Matt and several other employees. They had just come back from Iridium’s huge Partner conference. It was very refreshing to hear them talk about how much they loved bringing their hundreds of partners together in one spot to connect, learn from each other, find synergies, etc. This alone shows how complex Iridium and its various lines of business are.

One of my impressions about Iridium people: They seem to love a challenge. And there is no shortage of challenge in their workdays. I also gained a better understanding of their often referenced “Partner Ecosystem”, comprised of hundreds of companies, organizations, and government bodies that use the Iridium network to enable their communications solutions anywhere in the world. 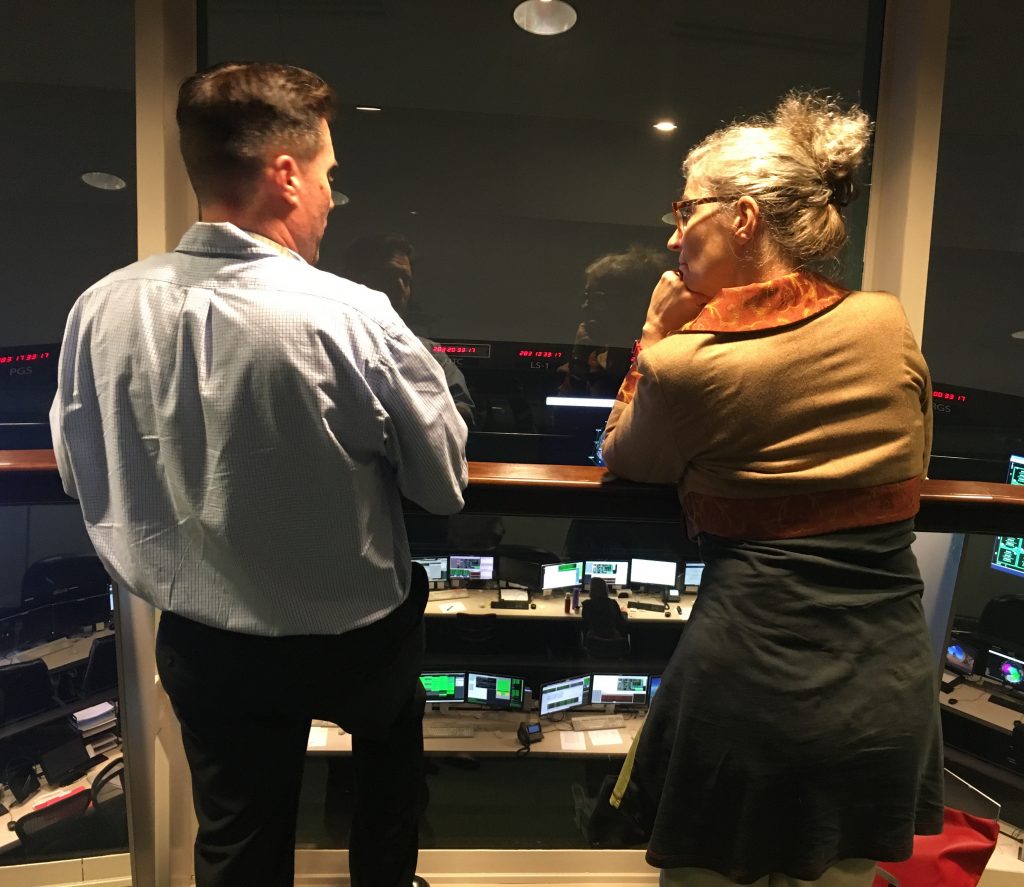 I learned a lot about the business, but what would Iridium be without its satellites? To learn more about them, we drove out to the SNOC. For me, it was the most exciting place – the “sanctuary” for me, the satellite fan! Two SNOC engineers showed me around the facilities: the room where the new satellites are tested and checked out after a launch, the main mission control room, and the “den” of the Flight Dynamics team. I learned about synchronizing clocks, about the satellites passing over ground stations, about the subtle differences between individual satellites. We even briefly stopped at the “graveyard” where the SNOC team stores “tombstones” they made as a humorous tribute to satellites that have already been decayed. I loved how it shows how much they love their work and their satellites!

I sadly learned that the deorbiting satellites start tumbling very soon after passivation, which brings down the chances of ever seeing them Flare again. We talked about collision avoidance and what goes into it. All my questions were met with respect and a great willingness to answer. The guys really seem to love talking about their work!

Time passed quickly! At the end of the day, I was handed a beautifully crafted “certificate” for being the world’s greatest Iridium Flare catcher! I was really moved by this very sweet gesture.

The visit to Iridium was a very precious and memorable experience for me, and one for which I will always be grateful. I thank Matt and his team from the bottom of my heart for their time, effort, warm-hearted spirit and great hospitality that made this visit truly unique and wonderful for me. My curious mind still has a lot of questions, so I guess I will keep Tweeting and asking, if I may.