Iridium sits down with Ian Urbina, Executive Editor of The Outlaw Ocean Project, for a Q&A on lawlessness at sea, human rights issues, music, how Iridium Connected® products help to keep him safe, and more.

As an investigative journalist, you’ve tackled hard hitting issues ranging from human rights to lawlessness at sea. What inspired you to address these issues?

I’ve been enchanted by the sea since I was a little boy. Spending time offshore always captured my imagination. I was especially drawn to the idea of taking a ship and for weeks crossing this strange and dangerous netherworld that seemed to abide by its own laws of physics. An experience akin to space travel, but on earth.

I got my chance, or so I thought, when I was in graduate school and employed as an anthropologist. I took a job on a research trip in Singapore, which, much to my annoyance, ended up never leaving port. So, as a travel experience, it offered little. But spending long days on the dock, I was exposed to the diaspora tribe of seafarers, and I was struck by how distinct they were. They were colorful, clever, rutty, irreverent, and generally outside the customs that us landlubbers often call law.

I knew from them that there was a truly outlandish world offshore and my hope then—and over a decade later when I convinced my editor to cut me loose so I could produce the series that ran in The New York Times—was to explore and chronicle these characters: the traffickers and smugglers, pirates and mercenaries, wreck thieves and repo men, vigilante conservationists and elusive poachers, seabound abortion providers, clandestine oil-dumpers, shackled slaves and cast-adrift stowaways. And, truth be told, once I was exposed to the place and the people, I was hooked. 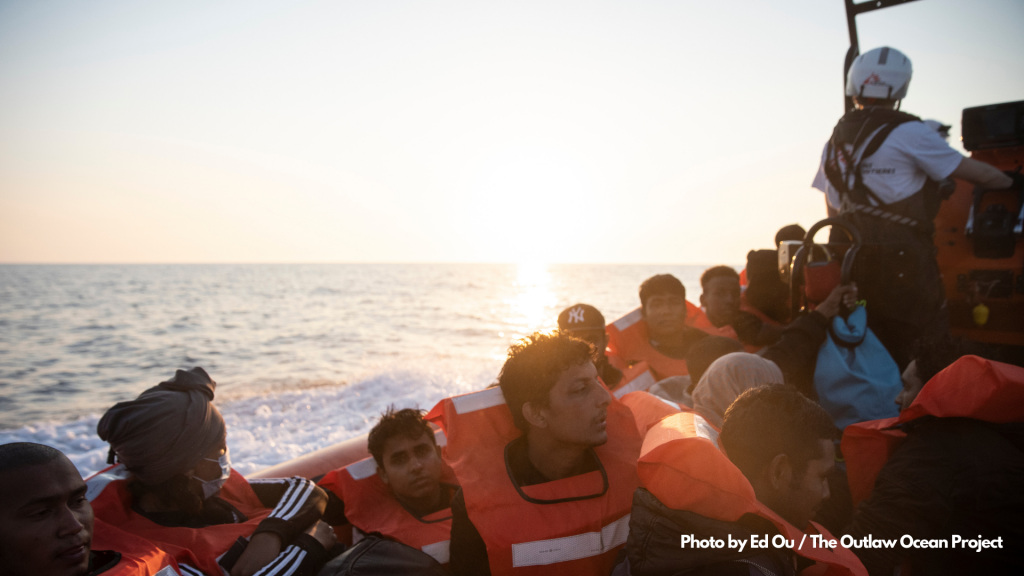 Bangladeshi migrants making their way from Libya to Europe are rescued by the crew of the Geo Barents, a rescue vessel operated by Doctors Without Borders.

We hear you rely on a number of Iridium® and Iridium Connected® products. What has that experience been like for you? How have these products helped you accomplish your missions as an investigative journalist?

Iridium equipment is vital for me to be able to do my job more effectively and safely. Every time I am reporting in dangerous locations, including Somalia, Borneo and Libya, I bring my Iridium products with me and my team.

A few months ago, we relied heavily on our Iridium Extreme® device and Iridium GO!® device when traveling to Libya for our most recent investigation, which is based on reporting that occurred in Tripoli and at sea, and focuses on the challenges of migrants trying to cross the Mediterranean Sea. One of my requirements was that my entire team had to keep these devices on hand while traveling throughout Tripoli.

Our full piece can be found in The New Yorker here: The Secretive Prisons That Keep Migrants Out of Europe.

Have there been any particular situations during your investigations where Iridium devices were particularly useful?

Whenever we go to sea, the Iridium devices are extremely helpful to our safe passage, but also because they help us know where we are throughout the entire journey. In some places I’ve traveled, such as Somalia, Borneo, and Indonesia, where territorial disputes are common, we have been able to determine whether we were in the locale belonging to one country or the other, by using the devices to determine the coordinates and later, overlay them on a map of contested waters.

Migrants from West Africa look out at the Central Mediterranean Sea on June 11, 2021, aboard the Geo Barents.

Musicians and journalists are both storytellers. One uses sounds, the other leverages words. The Outlaw Ocean Music Project is a first-of-its-kind collaboration of such creators. In combining their mediums, these narrators have conveyed emotion and a sense of place in an enthralling new way. The result is a captivating body of music based on The Outlaw Ocean. While reporting for five years at sea, my team and I built an audio library of field recordings. It featured a variety of textured and rhythmic sounds like machine-gun fire off the coast of Somalia and chanting captive deckhands on the South China Sea. Using the sound archive and inspired by the reporting, over 500 artists from more than 80 countries produced EPs in their own interpretive musical styles — be it electronic, ambient, classical or hip hop.

You can listen to this project anywhere you listen to music, including Spotify and Apple Music, or directly on our website. New music is published every month.

How can people learn more about what you’re doing?

First, they can visit our reporting website and our music project website. Our YouTube also has a wide array of video content from this reporting at-sea. Additionally, since most of us are on-the-go we have created a podcast based on our reporting, The Last Untamed Frontier which you can listen to and subscribe to on Spotify.

Lastly for those who want early access and behind-the-scenes information about reporting, be sure to check out our newsletter on Substack, which features both paid and free options. All donations benefit The Outlaw Ocean Project reporting.

What do you believe is the most important message people should know as a result of your work?

It’s difficult to care about things that we don’t know exist. Not only is there a lack of knowledge about what lives offshore, there is also a resulting lack of empathy or self interest in safeguarding the life and habitats out there. Meanwhile, this ignorance also allows entrenched misconceptions to stay entrenched. If industry argues that fish stocks can and will replenish themselves regardless of the intensity of industrial overfishing, who’s going to argue that they are wrong? If dumpers contend that sinking oil rigs offshore does more benefit than harm by providing a place for fish to hide, how can anyone prove that they are not right? And none of this touches on the possible self-interest we have at stake in exploring the oceans for the sake of discovering the cure to diseases, for example. The most important message people should know about is to dig deeper into their own daily use products, and try reading about topics that you do not just find in the mainstream flow of news.