If you have been following the Iridium blog, you may know that Iridium provided connectivity support for the eXXpedition – a series of all women voyages exploring and examining the impact and repercussions of ocean plastics and pollution. Behind this extraordinary cause is a team of talented women, and we had the pleasure of interviewing one of the organization’s founders, Emily Penn, who plays a critical role in each mission, and is a treasure trove of experience and information. Below we captured her story and perspective on their most recent voyage, the eXXpedition North Pacific, and wanted to share her insight with the Iridium community!

Iridium: What inspired you to start this amazing organization?
Emily: My journey to tackle plastic pollution began 10 years ago, when I hitch-hiked around the world on a bio-fuelled boat to get to a new job in Australia. It was a job I didn’t end up taking. Instead, shocked by finding plastic in some of the most remote places on our planet, I chose to live on a group of pacific islands for six months to organise a community clean-up. I then traveled to California to learn more from some of the experts in the field of ocean plastic. Since then, my career has been dedicated to raising the profile of ocean plastic and has taken me all over the world facilitating science at sea, outreach and the implementation of solutions on land. In 2014, I launched eXXpedition – organising all-women sailing trips with a focus of plastic and toxics in the ocean. It was supposed to be just one voyage, but it was such an amazing experience with such great energy, we decided to do more. The last eXXpedition voyage was our 11th!

What has been the most interesting experience while out at sea?
For me the worst thing is perhaps not what you expect. We do see some rafts of plastic and fishing line which easily entangle marine life, but for me it’s seeing the small pieces that overwhelms and astounds me every time. We take a fine net through the surface of the water and pull up hundreds of tiny fragments of plastic – it makes me release that the whole surface of our ocean is covered in a soup of plastic pieces.

How was the most recent voyage to the North Pacific Gyre?
We had two amazing voyages as part of eXXpedition North Pacific with two fantastic crews. Each voyage had a different focus. Leg 1 went into the heart of the North Pacific Gyre to look at the levels of plastic and toxic pollution. It was worse than I’ve ever seen, but I was energised by the women on the boat. They saw the problem and they wanted to make changes and apply their skills to make a difference. Leg 2 was a complementing voyage, with a focus on how plastic pollution was impacting communities and remote coastlines in British Columbia. We visited beautiful remote islands and were moved by how plastic was washing up on uninhabited shores. Again, the women on board worked out how their own skills could start to tackle ocean plastic. This is why I organise these sails, so we can take changemakers to see the problem and then support them in having a positive impact.

What is the most difficult part of life out at sea?
For a lot of the crew, the most difficult part is getting used to the motion of the boat, especially in some of the rougher weather we experience. Sea sickness makes it really tough for them, but it passes – it’s so often a case of sticking it out and making sure you do whatever you need to combat it.

What was the most surprising discovery made on this most recent trip?
I was generally horrified at how much worse the plastic pollution was on this sail than any of the others I have done. When we were sailing through the North Pacific Gyre, the visible flow of plastic past the boat was constant. On the beach in Oahu, Hawaii, it was difficult to distinguish between plastic and shell. In the beautiful Broken Islands, British Columbia, we found thousands of tiny pieces of polystyrene all over the beach – we tried to pick up as much as possible, but it was an endless task.

Are there any rituals or superstitions you or any of the other crew members hold to during the expedition?
There is a superstition that bananas on board a boat is bad luck. It turns out it’s quite true because they give off a gas that ripens other fruit and vegetables… so if you stow bananas down below, all your supplies go bad. If we do take bananas to sea, we hang them on deck!

During the most recent voyage, how did Iridium play a role?
Iridium’s technology was invaluable during our North Pacific voyage because it allowed us to share our stories and experiences in real time from our vessel, called the Sea Dragon, even when we were 800 miles from land. It was exciting to have technology that allowed us to share video, as well as text and images, because it was important to us to be able to show the world exactly what it was like to be sailing through the area that’s known as the Great Pacific Garbage Patch.

Are there any “must-have” tools, gear and/or accessories you recommend for anyone about to embark on a voyage?
Excellent communications are, of course, important for safety as well as communicating our messages. Other than that, some excellent waterproofs and warm layers – I’m almost always cold, especially on night watch!

What do you want the world to know about the current state of ocean plastics and Pollution?
Most of the fragments of plastic in our ocean are smaller than your little fingernail, and the same size and plankton, making it nearly impossible to clean up. We need to push for upstream solutions from business and policy makers to stop the flow of plastic into the oceans.

How can people get involved with the eXXpedition?
You can apply to sail with us! We are always looking for women from multidisciplinary backgrounds to join our crews. You don’t have to have any sailing experience, we just ask that you are passionate about making a positive impact on plastic pollution and applying your skills to the cause. You can apply for a 2019 voyage by visiting www.exxpedition.com/apply 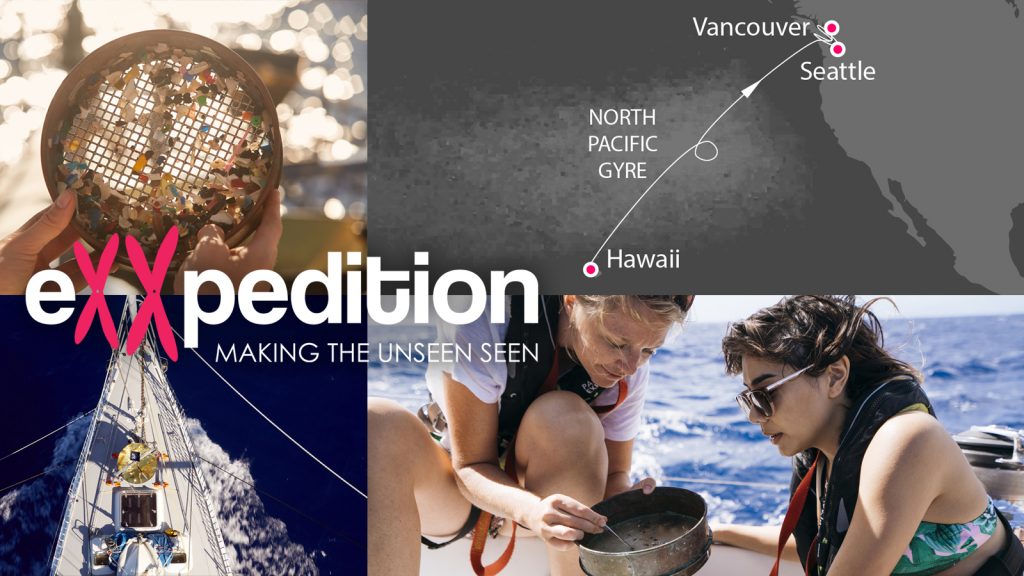