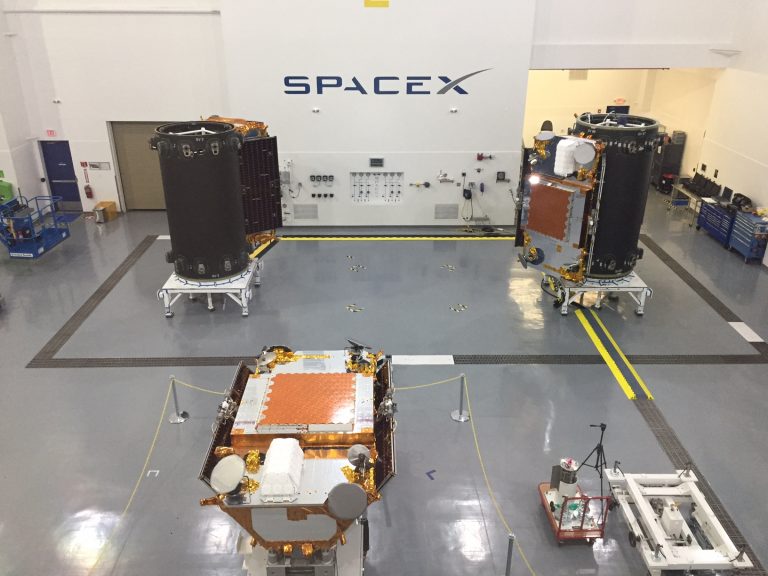 Pre-Launch Processing Nearly Complete in Anticipation of October 4th Launch
Iridium Communications (NASDAQ: IRDM), today announced that all 10 Iridium NEXT satellites for the third launch are onsite at Vandenberg Air Force Base (VAFB) in California. Pre-launch processing activities are underway, which includes mating them to the dispensers, fueling and encapsulation within the fairing. The Falcon 9 rocket stages and fairing components are also onsite and in processing for launch. Scheduled for October 4, 2017 at 6:06am PDT (1:06pm UTC), this early morning launch continues the ambitious deployment pace for the Iridium NEXT program, set to launch a total of 75 satellites on SpaceX Falcon 9 rockets. A total of 81 Iridium NEXT satellites are being built – 66 are required for the operational constellation, with the remaining 15 serving as on-orbit spares (nine) and ground spares (six).

“Our teams, not only in California, but also in Arizona and in Northern Virginia, have maintained a steady and impressive pace when it comes to pre-and-post launch operations,” said Matt Desch, CEO, Iridium. “We’re setting a new industry standard for satellite deployment, in terms of both time and efficiency. On our end, all systems are go for our coming predawn launch.”

The October 4th launch is the third of eight launches for the Iridium NEXT program. Under the lead of Thales Alenia Space (Iridium NEXT System Prime Contractor), the satellites were shipped in pairs from the Orbital ATK Satellite Manufacturing Facility in Gilbert, Arizona to VAFB. The satellites were delivered in specially designed motion and temperature-controlled containers designed to maintain optimal environmental conditions.

Iridium NEXT is the company’s next-generation global satellite constellation scheduled for completion in 2018. Iridium NEXT represents the evolution of critical communications infrastructure that governments and organizations worldwide rely upon to drive business, enable connectivity, empower disaster relief efforts and more. Iridium NEXT will introduce new capabilities, such as Iridium CertusSM, the company’s next-generation multi-service communications platform, which will deliver broadband speeds over L-band for aviation, maritime, land mobile, Internet of Things applications for commercial and government organizations. It will also enable the AireonSM space-based ADS-B, real-time, global aircraft surveillance and flight tracking system.