Hydrazine – Toxic for humans, but satellites love it. 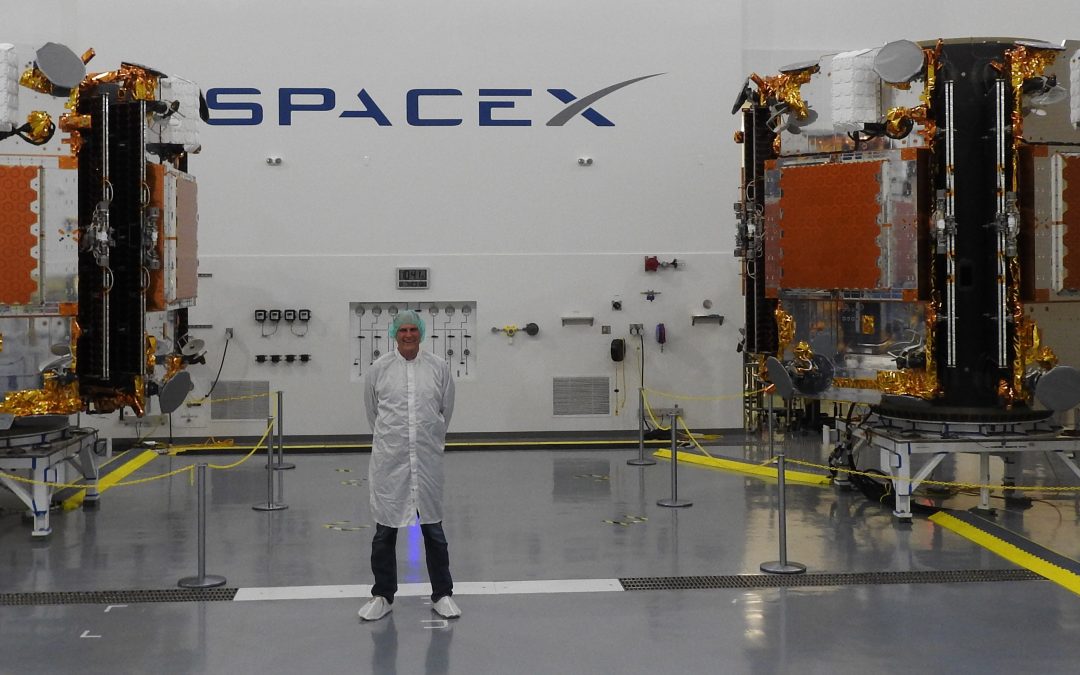 John McBride with Iridium NEXT satellites mated to their dispensers at the SpaceX complex at Vandenberg Air Force Base.

Today’s successful static fire test is yet another significant milestone passed along the way to the second Iridium® NEXT launch on June 25th. And, just like how the SpaceX Falcon 9 rocket has a sophisticated engine system, Iridium NEXT satellites each have their own thrusters for in-orbit maneuvering. Iridium NEXT Space System Engineer Contractor John McBride shared with us how the satellites’ engines don’t actually “burn” their fuel to produce thrust, among other curious facts. To get a better understanding of just how this system works, we sat down with John to learn more about the Iridium NEXT satellites’ fuel, hydrazine, and how while the fuel is great for satellites, it’s incredibly dangerous for people.

So just like how rockets have rocket fuel, satellites have a fuel of their own. Can you tell us a bit about the fuel for Iridium NEXT satellites?
Rockets like the SpaceX Falcon 9 develop tremendous thrust by “burning” fuel (combining the fuel with oxygen and heat), but Iridium NEXT satellite engines use only fuel and heat, no oxygen. This makes the propellant system much simpler and lighter, providing small amounts of controlled thrust using small quantities of fuel for a long mission. Block 1 (the original Iridium satellite constellation) and Iridium NEXT satellites use anhydrous hydrazine (N2H4) for the fuel because it is stable for long missions. We call this type of system monopropellant, or “monoprop.”

What are some of the properties that make it uniquely good for satellites, but also incredibly toxic for people? Are there alternatives to hydrazine?
Hydrazine is a clear liquid that looks and behaves much like water. It has a similar freezing point, surface tension, density, and viscosity. It has a unique characteristic of producing a white vapor that resembles cigarette smoke. It has a smell of ammonia (a close chemical cousin) and fish.

Hydrazine dissociates (separates) and expands in the presences of a catalyst and heat, providing the thrust needed to move the satellite. The Iridium NEXT engines contain small crystals of rare earth metal to act as a catalyst (cat bed) and heaters to get the chemical reaction started. In order to keep the engines clean we have to make sure there are as few impurities as possible in the fuel. For this reason, we buy a rare and expensive form of hydrazine called ‘ultra-pure’. We control the thrust by controlling the flow of hydrazine through valves. Despite these distinctions, we still say ‘burn’ when referring to what our engines do (a lot simpler than rapid energetic dissociation).

Hydrazine will burn if given the opportunity. In fact, in the presence of oxygen (air), a catalyst (a spot of rust in a room, for example), and a small amount of heat, hydrazine will spontaneously explode.

These characteristics make it desirable as a fuel for satellites, but dangerous to the humans who are around it. Besides being highly and easily combustible, it is extremely toxic, caustic, and probably carcinogenic. Humans exposed to hydrazine vapor will suffer burns in the eyes, nose, mouth, esophagus, and respiratory tract. Severe burns can be fatal. Liquid hydrazine on the skin is quickly absorbed and acts as a neurotoxin. Burning hydrazine is extremely hot, but produces no visible flame (yes, it’s like invisible fire!) which can quickly spread to other combustible materials (clothes, skin, etc.).

There are some new alternatives being developed called “green fuel” but these tend to be only slightly less caustic and combustible and the long-term performance in a space mission is just now being demonstrated.

With a substance so toxic and dangerous, what are some of the safety protocols followed for fueling with Hydrazine? How is it transported from one place to another?
Hydrazine is always transported in a Department of Transportation approved tank called a DOT 110. These tanks are very robust, and must demonstrate that they will not rupture or leak in a variety of conditions and forces.

For Iridium NEXT, the hydrazine is shipped to Vandenberg Air Force Base in California, where it is stored in an open-air fuel farm along with fuels for other missions. It is brought to the SpaceX Payload Processing Facility (PPF) days before fueling in order to stabilize to the ambient temperature. Handling these tanks require leak detectors and access to emergency breathing equipment (often called gag bags), but otherwise no special protective clothing.

Once we start moving the fuel from the DOT 110s to the satellites, all non-essential personnel are evacuated from the building and the operation is controlled from a building several hundred meters away. Personnel entering the PPF must wear Self Contained Atmospheric Protective Equipment (SCAPE). These suits are the same suits as used by Fire and Rescue departments everywhere. Breathing air is provided by hoses connected to a supply outside of the building.

Once the fuel is in the space vehicles, the tools are cleaned, the fuel transfer lines are purged, and everything including the operators are “sniffed” using a portable detector to make sure there is no contamination. The fuel valve on the satellite is closed and a secondary cover is lock wired into place. Once the fuel tanks are pressurized to flight pressure and they have been shown to be stable and leak free, personnel are free to re-enter the PPF. However, we always operate leak detectors and have access to gag bags.

How long can Hydrazine last in space? And how much is put in to each satellite?
Hydrazine is very stable and does not undergo any long term chemical changes. It can last indefinitely in a clean tank. The hydrazine in Block 1 satellites was produced in the mid ‘90s and still works perfectly. The Iridium NEXT satellites each have 164 kg of hydrazine and 1.5 kg of Nitrogen to pressurize the tanks. Most of this will be used to move the satellites from their insertion orbit to mission orbit, or to deorbit them when they have finished their mission, very little is used during the course of the mission.

How much does Hydrazine cost and what is the manufacturing process?
The Ultra-Pure hydrazine for Iridium NEXT was procured by our prime contractor as part of their contract, so the actual cost is not known to us, but during Block 1 we paid about $85/lb. Typical cost is around $100/lb. The real cost of hydrazine is probably in the protective measures we take to deal with it. SCAPE, detectors, disposal of waste, and mitigation plans are all very expensive.

Hydrazine is manufactured by chemically adding an oxygen atom to an ammonia molecule, then by using something like a giant a distillation column (really big still), which separates the hydrazine molecules from the ammonia and other impurities.

What else can you tell us about hydrazine?
Hydrazine is nasty. If you see water that is smoking, or if you smell fishy ammonia it is best to get away, go outside, and move upwind. But treated carefully it is stable, predictable, and critical for our mission success.