The Antarctic region contains a wealth of information about the Earth’s weather systems. The ability to successfully conduct research in this part of the world is crucial to the preservation of the planet we all call home. As the only satellite network that provides 100 percent global coverage, including in the North and South Poles, Iridium enthusiastically recognizes its unique opportunity to support projects focused on conservation and fostering scientific advancements. One environmental initiative Iridium is currently supporting is the Antarctic Circumnavigation Expedition (ACE). 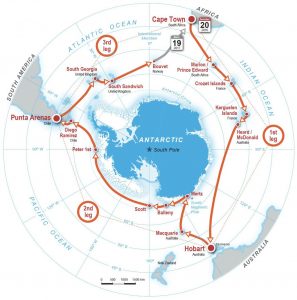 Founded by the Swiss Polar Institute, ACE has a mission to enhance international relations and collaboration between countries, as well as to motivate the participation and interest of the world’s younger generation of explorers and scientists in polar research. Given the geographical location of this project, Iridium was proud to offer support as the sole satellite communications provider, supplying the mission with Iridium Pilot® and Iridium GO!® devices, and several satellite handsets. The inherent advantages of Iridium’s global constellation of low-Earth orbit (LEO) satellites, allow ACE participants to send data back to their teams on land from the planet’s most remote locations. Additionally, given the harsh conditions in the Antarctic, the project team will have the peace-of-mind that in the event of an emergency they will have access to reliable satellite communications to call for assistance regardless of the weather or their location.

ACE is hosting scientific and investigative teams from all over the world on board a Russian research vessel, known as “Akademik Tryoshnikov”. These teams have been conducting scientific research projects ranging from climatology and biochemistry to glaciology and biology. In December of 2016, the vessel embarked on its unprecedented polar research expedition around Antarctica. The expedition started its first leg from Cape Town, South Africa, traveling the stormy latitudes of the Southern Ocean and calling at sub-Antarctic islands on its way to Australia. In Hobart, new researchers came on board and the ship sailed south reaching the edge of the Antarctic continent. Ploughing through packed ice, the ship visited some of the most remote and unknown islands in the world before arriving at Punta Arenas, Chile. The final leg back to Cape Town is currently underway, and the teams are visiting South Georgia and lonely Bouvet Island before the expedition concludes in March.

For the 150 investigators involved in the ship’s three legs, there is a range of heavy duty scientific equipment, including remote operated vehicles, ice-penetrating radar systems, ice coring and water sampling equipment. Additionally, there are two helicopters and three inflatable zodiac boats, which are crucial for allowing scientists to land in these remote latitudes. All internet connectivity for the vessels and helicopters, which is vital for transmitting and receiving communications and data during the voyage is provided through the Iridium® network.

Vessel connectivity is supported by two Iridium Pilot® devices, two Iridium GO!® units and multiple satellite phones, and helicopter operations are connected via Iridium® Spidertracks flight following and messaging devices. Being able to track the accurate location of the helicopters is vital for safe flight operations, especially in such a remote and harsh environment. Internet access is controlled further by Nippy Networks Redbox, ensuring efficient bandwidth usage and allocation to the many wireless devices on the vessel.

Alongside the research teams, scientific equipment and Iridium devices, there is a special guest on board, a teddy bear named SPF Bear Antarctica, who continues to make cameos at the various stops during the trek. You can keep track of his whereabouts on Twitter at @SPFBearACE.

To date, many incredible findings have already come out of the various projects taking place onboard the vessel. To follow the remaining legs of the expedition, learn more about the mission, read testimonials from investigators, or view stunning photos of Antarctic landscape, be sure to visit http://www.spi-ace-expedition.ch/. You can also follow their journey on social media at the following profiles and handles: @ACEexpedition (Facebook), @ACE_Expedition (Twitter), ace_expedition (Instagram) and ACEexpedition (Snapchat).

To track the vessel in near real-time, please visit https://iridium.globalalerting.com/public-map/caa339bf-12db-4a48-a40e-0a55bfe28e05