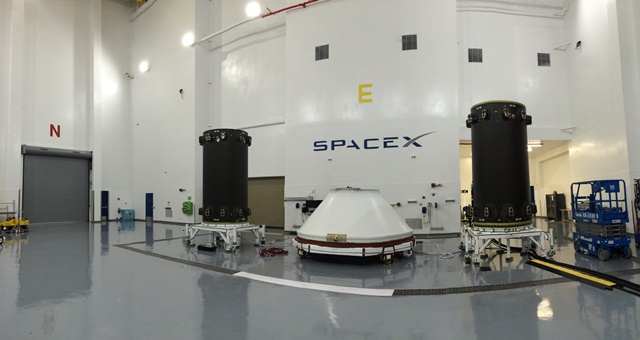 As the targeted first launch date of September 12, 2016 for Iridium NEXT quickly approaches, Iridium and its partners continue to reach key milestones. On Tuesday, June 21st, SpaceX shipped the first Falcon 9 Iridium NEXT satellite dispenser to the Vandenberg Air Force Base launch site in California, and on Monday, June 27th, it was confirmed that the dispenser arrived safely. These events keep the program on schedule and mark significant launch preparation achievements.

SpaceX, Iridium’s launch partner, has been tasked with delivering 70 Iridium NEXT satellites into low Earth orbit, completing the largest tech refresh in satellite communications by replacing the Company’s existing constellation with 66 new operational satellites and launching additional satellites to serve as on-orbit spares. With this partnership came an important challenge – preparing the SpaceX Falcon 9 rocket to launch 10 Iridium NEXT satellites into orbit per launch, with seven launches expected by the end of 2017.

In order to accommodate a payload of this size, SpaceX developed a Falcon 9 satellite dispenser unit that was capable of managing the critical-timed separation and deployment of ten satellites from each rocket. These dispensers were built out of a carbon fiber composite to reduce mass, minimize the total number of parts and simplify their composition while increasing structural stiffness and strength. The design of this dispenser places the Iridium NEXT satellite vehicles in two separate stacked tiers around the outside of each dispenser, holding five satellites per tier.

“We’re excited for the upcoming first launch of Iridium NEXT and proud of the work we’ve completed for the Iridium NEXT program. This is one of the heaviest payloads we will fly to-date – 10 Iridium NEXT satellites weighing over 20,000 pounds,” said Kris Kroc, mission manager at SpaceX.

Now that the dispenser is at the launch facility, the team will be running a series of end-to-end electrical tests with the tiers separated, as seen in the accompanying photo.

Iridium is incredibly thankful for all of the hard work, time and resources SpaceX has allotted in order to accommodate the launch program of Iridium NEXT. Stay tuned for more Iridium NEXT program updates coming soon!

For more information about Iridium NEXT, please visit the Iridium website.