Part 2: Pushing the Limits of Aviation – Locating a Moving Refueling Station in the Arctic Ocean 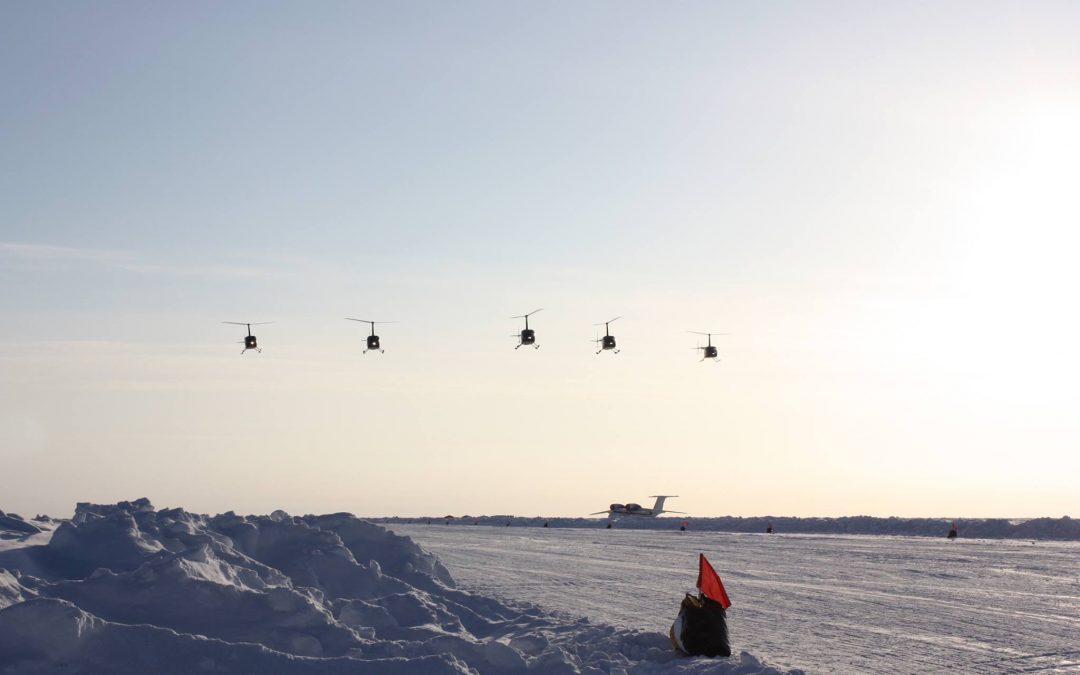 While it may seem like a given, if you’re flying a helicopter and it runs out of fuel, the engine immediately shuts off. This poses a serious problem when flying long distances in remote locations and over icy waters – say, to and from the three North Poles (geographic, magnetic and the pole of inaccessibility), for example. This posed one of the largest challenges facing Evgeny Kabanov, Michael Farih, and the other members of the Three North Poles Expedition.

In some cases, explorers can reach agreements with international services or aviation organizations to provide refueling accommodations. However, in the case of the Three North Poles Expedition, busy schedules, limited resources, and language barriers prevented the pilots from reaching an agreement with the Norwegian coast guard.

“We had to fly about 715 nautical miles from Svalbard to the Barneo ice base, and that was far beyond our fuel range. That presented us with two options: either make multiple trips and shuttle the fuel ourselves, or find some transport to carry our barrels as far north as possible” said Evgeny. “After weeks of negotiations with various providers, we reached an agreement with a Russian coal company operating in Svalbard that would provide one of their large Mi-8 helicopters that could be used to cargo our fuel.”

The Mi-8 took the extra fuel, leaving a few minutes before the expedition group, and delivered it about 185 miles north of Longyaerbyen, leaving it on a large ice float. As the Mi-8 was a few minutes ahead of the group, the captain then relayed the coordinates to them, so they could easily locate the barrels.

Although the ice float was large enough to hold multiple helicopters and the fuel tanks, it was still drifting unpredictably in open water – meaning there was no guarantee that it would remain in the same location during the return trip days later.

The group needed a reliable way to track its location, so they opted to leave behind a DeLorme inReach SE with the fuel tanks and set it to emit a locator signal every four hours. Using the GPS capabilities of the inReach, the expedition’s ground team in Moscow could then relay the changing coordinates of the “fuel depot” to the team, which they would receive on their smartphones, thanks to their Iridium GO!®.

Iridium® devices are designed to be ruggedized and withstand the elements, but not everyone gets the actual opportunity to push that limit. For the pilots, they didn’t fear any malfunction caused by the cold, as Michael had personally tested an Iridium GO! by leaving it in the helicopter canopy overnight when temperatures hit -28º Celsius*.

The team safely arrived at their destinations and achieved their goal of visiting all three North Poles, but now came the tricky part – refueling and returning home. After many hours logged already on their return flight, they realized that they were reaching the bottom of their fuel tanks and only had about an hour of flight time remaining. To make matters worse, the visibility was poor that day, making it even more difficult to visually confirm the location of the fuel tanks.

Although Evgeny and Michael were using Iridium GO! to receive the fuel tank coordinates from the ground team in Moscow, they had set the tracking interval on the inReach to only emit a signal once every four hours to extend the device’s battery life. Within those signal intervals, the ice float could change direction and floating speed, making it even more difficult to track. With time and conditions working against them, the pilots needed to find their fuel quickly or risk going down in icy waters.

Luckily, the timing and accuracy of the inReach’s last signal correctly provided the ground crew with the location of the fuel tanks. With the Iridium GO!, the coordinates were provided to the pilots. Without the Iridium network, locating the tanks would have been nearly impossible, as the ice float had moved more than 42 kilometers from its initial position! With their helicopters successfully refueled, the group made it safely to the Svalbard airport, and eventually back to Moscow.

“When planning the expedition, we discussed different solutions for finding our fuel depot on the way back – radio beacon, marking the snow with a bright color, using a red helium-filled balloon. After some discussion, we decided to use the DeLorme inReach SE,” said Michael. “On the day we returned, the weather conditions were pretty poor, limiting our horizontal visibility to about 3 kilometers and our cloud base to about 200 feet. Without the inReach, we couldn’t find our fuel in those conditions, especially since it had moved more than 40 kilometers from its initial position.”

Iridium has proven to offer effective technology for keeping adventurers connected – no matter where they venture – and sometimes, that connectivity also proves to be lifesaving. Stay tuned for tomorrow’s post that highlights how Iridium helps simplify the “search” in “search and rescue.”

* We’re pleased Michael’s Iridium GO! handled these extreme conditions, but please note, when planning your own Arctic expedition, that this temperature is outside the Iridium GO!’s performance specification.