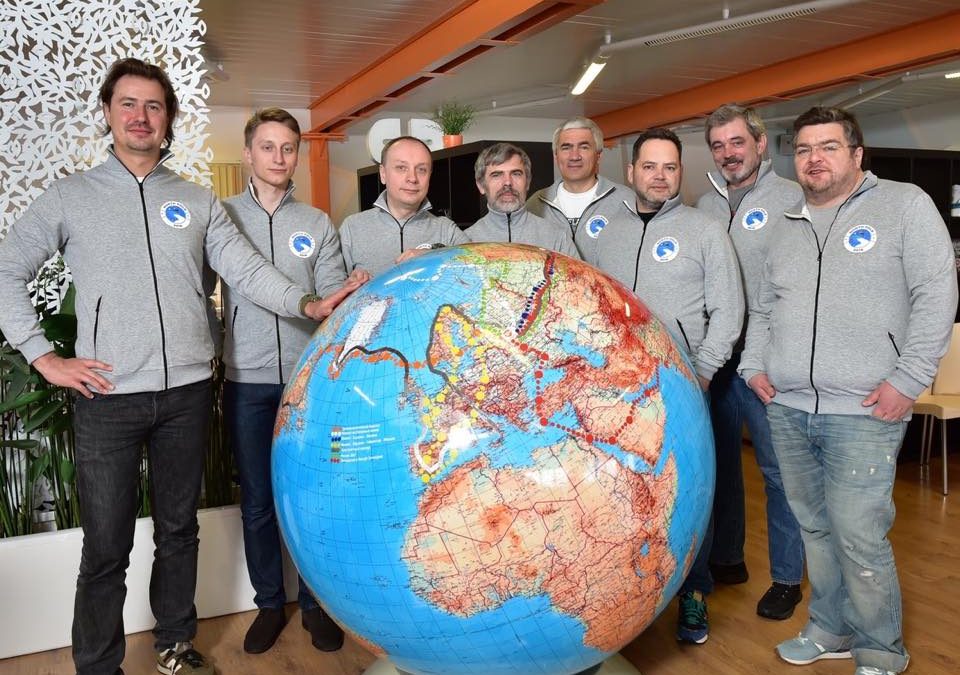 A helicopter expedition to the three North Poles (geographic, magnetic, and the northern pole of inaccessibility) – an incredible adventure or near-impossible feat? Depends who you ask. For Evgeny Kabanov and Michael Farih of Moscow, Russia, it was an opportunity to make history while pushing the limits of aviation.

As members of the Three North Poles Expedition, the plan was for the two of them to join six other experienced helicopter pilots in an attempt to visit all three North Poles in a single expedition, setting a world record in the process. Over the course of ten days, the group would leave from Moscow, travel to Svalbard, Norway, then onto the temporary ice base Barneo, and eventually hit the poles – visiting all three in one-day.

Traveling in four Robinson R66 helicopters, the pilots challenged the preconceptions and general practices of helicopter travel in remote locations. Prior to the expedition, it was not known whether light helicopters could fly at such low temperatures with sudden weather changes. Further, in the event of an emergency, there would be no help geographically available within a 1,000 kilometer radius, and it would be even more difficult to request assistance as the group traveled outside the range of traditional cellular and data service.
Considering the harsh conditions, the expedition required very careful preparation. Knowing this, the group brought along a variety of Iridium devices such as the Iridium 9555 handset and docking station, Iridium GO! ®, and the DeLorme inReach SE. They knew that they could trust Iridium, the only company offering pole-to-pole connectivity, to provide reliable, global connectivity to access valuable information and keep them safe while traveling off the grid.  Evgeny and Michael were especially fond of Iridium GO!, as it added an extra layer of convenience and flexibility by letting the pilots use their own smartphones to access voice and data services, rather than using an unfamiliar device. This capability is crucial for the pilots who must maintain focus on the helicopter controls, and don’t have much time to figure out a new device or interface when communicating with the other pilots or checking coordinates.

“While the docking station for the Iridium 9575 is good if you fly the same aircraft, Iridium GO! is the ideal solution if you change helicopters – as I often do during different expeditions,” said Michael. “Iridium GO! can be installed and removed in seconds, it connects to your pilot’s headset via Bluetooth or your smartphone via Wi-Fi, and it has a solid battery so you can remove it from your cockpit and take it anywhere. The DeLorme inReach SE is also a superior solution for tracking and texting as well, as it works in high latitudes without service disruptions.”

With the trip mostly planned and the proper devices equipped, the only remaining detail was refueling. It’s about 700 nautical miles to the North Poles, which far exceeds the range for a flight-acceptable amount of auxiliary fuel. After all, these are small aircraft, so the pilots don’t want to exceed weight limits and jeopardize their flight. So then how do you coordinate refueling in a location beyond the reach of civilization?

Be sure to come back tomorrow to learn how Evgeny and Michael used their wits (and Iridium devices) to refuel their helicopters and support their potentially record-breaking expedition.