In this industry, innovation, precision and collaboration are key in bringing revolutionary technologies to market. As Iridium CEO Matt Desch has said, “In the satellite space industry, we have to work with others. Partnerships are crucial, and ours with SpaceX proves how important it is to work together to be successful.”

SpaceX is known as a leading commercial space exploration company that designs, manufactures and launches advanced rockets and spacecraft. It provides regular cargo resupply missions for NASA, and is the first rocket provider planning to send a human to Mars. But before all of its fame and notoriety, SpaceX was a startup with lofty goals. In 2010, Iridium believed in the company’s vision, and contracted with them to launch its entire next-generation global satellite constellation, Iridium NEXT, becoming SpaceX’s largest commercial customer. Iridium placed its largest initiative in the hands of a startup, essentially entrusting the future of the company with SpaceX. 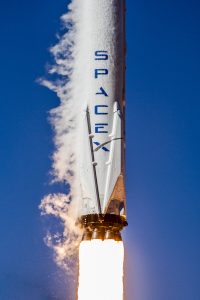 As Iridium’s sole launch provider, the partnership with SpaceX is an example of trust, ingenuity and perseverance. “There are so many variables that need to be considered when finalizing launch preparations, and a slight deviation or unexpected behavior by any of them can jeopardize the launch integrity,” notes Iridium COO, Scott Smith.

Today, SpaceX employs more than 4,000 people, and Iridium remains its largest commercial customer. Seven years ago, Iridium purchased a new SpaceX Falcon 9 rocket that was going to set a new standard of excellence for the Space industry, with the goal of launching nine satellites per launch. Over the years, the rocket evolved and exceeded performance expectations, which now allows Iridium to launch 10 Iridium NEXT satellites per Falcon 9 rocket, an amazing technological feat.

Every Iridium NEXT satellite weighs 1,900 pounds, which is about the size of a Mini Cooper automobile. To put this into perspective, each rocket will carry approximately 19,000 pounds into space – that is the weight of a semi tractor trailer truck!

The two companies have been through numerous challenges; however, on January 14, 2017, the first Iridium NEXT launch occurred. On that date, SpaceX successfully launched the first 10 Iridium NEXT satellites on its Falcon 9 rocket. All subsequent launches will be on the same type of rocket, which is manufactured entirely in the United States, and is designed to be the world’s first fully reusable rocket, ultimately reducing the cost of space travel.

SpaceX’s President and Chief Operating Officer, Gwynne Shotwell shares, “I think both (Iridium and SpaceX) are incredibly innovative companies. Iridium and SpaceX obviously like the concept of change – change to make it better, not change just for change’s sake.”

Desch continued that, “In order to build successful LEO networks, you have to take it up a level of magnitude. You need to be 10 times better than the competition. Working with SpaceX allowed us to find an achievable and cost-effective launch plan to set us apart and allow us to start the largest tech refresh in space history.”