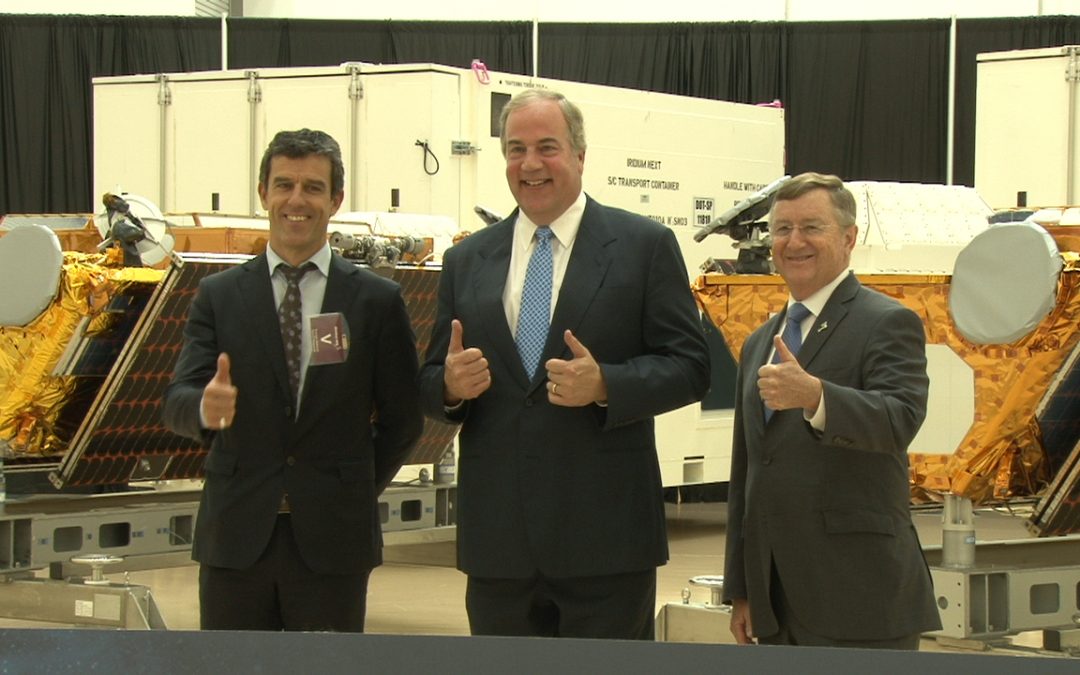 In case you missed it, Iridium and its partners, Thales Alenia Space and Orbital ATK, hosted a press conference on Tuesday, June 14th at the Orbital ATK Satellite Manufacturing Facility in Gilbert, Ariz. The event gave select members of the media an inside look into the Iridium NEXT production program and announced the targeted first launch date of Iridium NEXT. Media witnessed the unveiling of the first two ready-to-ship Iridium NEXT satellite vehicles and took part in tours of both the Orbital ATK and Iridium facilities in the greater Phoenix area.

The event kicked off with remarks from Iridium CEO Matt Desch highlighting the company’s history, the marvel of Iridium’s technology and the events that took place to position the company where it is today – about to start launching its next-generation global satellite constellation.  Most importantly, the target first launch date of Iridium NEXT was officially announced for September 12, 2016.  As explained by Desch, this is the earliest date SpaceX and Vandenberg Air Force Base were able to provide and, though it is later than hoped, Iridium is still on track to fully launch the constellation by the end of 2017.  He wrapped up his remarks by re-affirming that the first two Iridium NEXT satellites are “done, done, done” and ready to ship to SpaceX.

Up next on the speaker’s podium was Bertrand Maureau, executive vice president of telecommunication at Thales Alenia Space.  His remarks focused on the incredibly talented global teams working on the Iridium NEXT program, and he even listed some very impressive statistics about all of the work that has taken place to reach this historic milestone.  To paint a picture of the complexity of this program, Maureau mentioned that over 500,000  lines of code have been created and 100,000 documents have been shared among the team. This kind of effort and hard work, he noted, has resulted in an impressive assembly line production process that will now begin to complete five satellites per month, which is an amazing feat.

To wrap up the press conference, Orbital ATK’s President of the Space Systems Group Frank Culbertson showcased their manufacturing facility which has been able to support and run such an extensive manufacturing program.  The factory hosts 18 different work stations where all 81 satellite vehicles will be assembled, integrated and tested for space. Culbertson thanked Gilbert, Ariz. Mayor John Lewis, who was in attendance, for helping create a foreign trade zone in their facility in order to efficiently receive and send all of the necessary components for each Iridium NEXT satellite vehicle.  From here, attendees were able to see the first two satellites, which are completed and ready to ship to Vandenberg Air Force Base in preparation for launch.

If you would like to see key portions of the press conference, please go to the video above.