Part 3: Pushing the Limits of Aviation – Iridium® Simplifies the “Search” in “Search and Rescue” 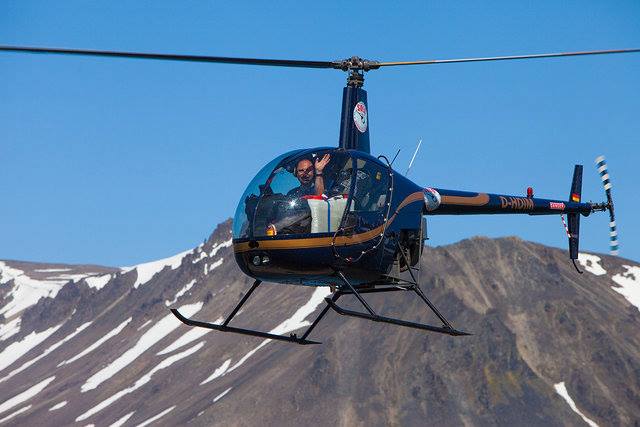 It’s impossible to anticipate emergency situations before embarking on an adventure, but it’s critical to always be prepared to handle one. In the instance of Sergey Ananov, a friend of Michael Farih’s as well as the rest of the Three North Poles Expedition group, it wasn’t just about taking the proper precautions and having an emergency plan – it also meant having the best technology to ensure his safety.

Sergey was attempting to fly around the world in an R22 helicopter. His trip would start from Moscow and he’d fly east across the entirety of Russia. He’d then fly into North America, and zig-zag between the Gulf of Mexico and Canada – a requirement for collecting the necessary miles for an around-the-world trip. He’d eventually fly across the north Atlantic Ocean, over Greenland and across parts of Europe, before returning to Moscow.

For those unfamiliar with Russia, there aren’t too many noticeable landmarks when traveling through the uninhabited parts of the country.

With limited visual cues, it’s easy to get lost if you don’t have the right tools. In fact, Sergey quickly identified his initial equipment selection to be unreliable, causing him to get lost a few times crossing Siberia and far-east Russia. As previously indicated, with finite flying time between refuels, every minute can make the difference between a successful journey and disaster. Upon reaching the eastern part of Russia, he made a critical decision to pick up a DeLorme inReach SE before continuing his journey – a move that may have ultimately saved his life.

With the device now in hand, Sergey used the inReach, enabled by the Iridium global network, to share his coordinates with Michael, who was back in Moscow. Sergey set the inReach to provide coordinates every two minutes initially, but eventually switched it to every 10 minutes. However, Michael recommended reverting back to a two-minute interval before crossing oceans, as the granularity of the data would be more useful in the event of an emergency. Sergey obliged. “I’ve crossed oceans before during my own travels and have also followed my friends’ trans-ocean expeditions, so I know how important it is to know your exact location in case of an incident that requires a search and rescue,” said Michael.

As Sergey reached the north Atlantic Ocean between Canada and Greenland, his Iridium-enabled devices worked flawlessly. He didn’t anticipate one other key piece of technology to fail though – his helicopter. As one of the drive belts failed in Sergey’s helicopter, he was forced to descend toward the icy water below. With limited time to act, Sergey managed to perform a controlled ditch into the ocean and climb onto a floating piece of ice. Although he was not injured during the ditch, he was not out of the woods yet, as he was in a frigid environment with no means of communication.

Thankfully, the timing of the inReach signal providing Sergey’s coordinates to Michael was in the last seconds before the helicopter sank, reporting zeroes for both his altitude and speed. As soon as Michael received the transmission and realized the gravity of the situation, he immediately alerted the Canadian coast guard to launch an emergency search and rescue.

Had Sergey been able to retrieve the inReach, he could’ve provided continuous, real-time coordinates of his location and also receive messages from the rescue team, but it was lost with the helicopter. Still, Sergey trusted the tracking capabilities of his inReach and was confident that a rescue operation was underway, but he was still in the middle of nowhere and he wasn’t alone. As he floated on that piece of ice, a curious polar bear began to approach his location. Fearing for his safety, Sergey attempted to scare off the polar bear. He was successful in doing so at that moment, providing some momentary relief, but that wouldn’t be the only time that a polar bear visited him. Luckily, he was once again able to deter the other polar bear during the second encounter.

“As a basic rule, polar bears find stranded artic travelers sooner than the rescue teams,” said Sergey. “I was very lucky to find common language with them, or maybe they just weren’t that hungry.”

Upon leaving their base for the rescue attempt, the Canadian coast guard experienced some harsh weather that severely limited their vision. With little to no visibility, the rescue team had to rely heavily on the last coordinates from the inReach and hope that Sergey hadn’t drifted too far. A dramatic 38 hours later, the coast guard was able to find and rescue Sergey – thanks primarily to the inReach providing the last-second coordinates of his location in a vast sea of ice.

“I know that my inReach was reliable, and I was confident that it had sent my location during its last signal,” said Sergey. “Five hours after the accident, a rescue aircraft flew overhead. I tried to get its attention with a flare, but the aircraft was unable to see me due to the fog. But I was at least sure that a rescue team knew my coordinates – and that’s all thanks to Iridium technology. I just had to stay alive in the harsh conditions and be ready to send a visual distress signal when needed.”

Sergey, along with members of the Three North Poles Expedition, are just a small sample of adventurers and professionals that rely on Iridium devices to remain connected and safe while traveling. As the only network offering pole-to-pole connectivity and communication, Iridium helps provide the peace of mind adventurers like Sergey and Michael need to embark on these types of expeditions, and ultimately make the world more accessible.