Test Your Satellite Phone with Iridium 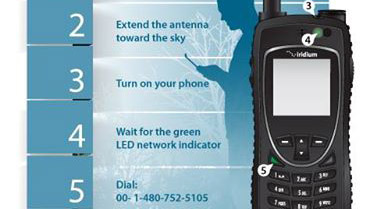 As difficult as it may be to predict when a disaster or crisis situation will occur, it is always possible to prepare ahead of time. It can be as simple as talking to your family about an emergency plan, building a kit full of necessities and ensuring your communication devices are in proper working order.

The annual Test Your Satellite Phone program was established by Iridium to support first responders, emergency workers, government agencies and anyone else who might be in a life-threatening situation and need communications to count on. To ensure you are fully prepared in the case of an emergency, follow these six easy steps to test your satellite phone to ensure it is in proper working order. For more information visit http://www.iridium.com/TestYourSatellitePhone or dial 00-1-480-752-5105 to get started. No data rates will apply.

Iridium has aided in emergency situations across the globe – including major relief efforts for individuals and group expeditions where unexpected crises have emerged.

The Iridium Extreme® was used in the aftermath of super Typhoon Haiyan in the Philippines in 2013 by providing reliable communications to a Canadian Emergency Response Search and Rescue team. ERT-SAR needed to communicate with local hospitals and consult with healthcare professionals back in Canada to assist locally displaced victims in Cebu, Philippines.

Iridium observed a significant jump in satellite traffic spikes during Hurricane Sandy in 2012 and Hurricane Katrina in 2005. Sandy was the deadliest and most destructive hurricane of the Atlantic hurricane season, as well as the second-costliest hurricane in the United States History. Iridium’s mobile satellite services were critical in the early stages of these natural disasters, serving as a lifeline to many first responders and search and rescue personnel on ground.

Iridium has also been along adventures where emergency situations struck and has helped save the lives of many during their crucial times of need.

Sarah Outen, a British young female adventurer was supported by an Iridium satellite phone as she attempted to become the first woman to row solo across the treacherous North Pacific Ocean. As Sarah prepared to row from Japan to Canada, news came that Tropical Storm Nawar was heading her way. Hitting winds of 65 knots and waves measuring 15 meters, Sarah was strapped into the small back cabin with emergency rations and her Iridium satellite phone left to call for immediate assistance and emergency pickup. With her Iridium satellite phone, Sarah was able to update her team every hour before the Japan Coast Guard was able to locate her.

If you don’t have a satellite phone, check out the Iridium® 9555 and Iridium Extreme®. They are the only satellite phones with extended battery life, with up to 4 hours of talk time and up to 30 hours of standby time—ensuring a critical lifeline is available when it is needed most.