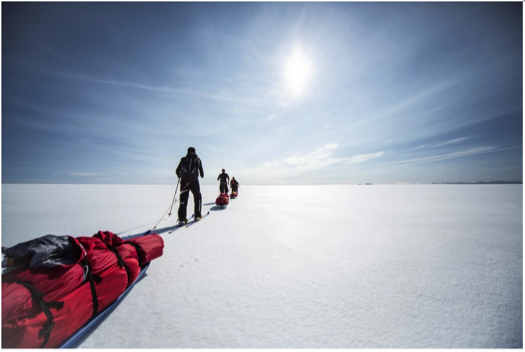 Putting modern satellite technology to the test, three teams of wounded servicemen and women from Canada, the U.S., the U.K., and Australia are racing to the South Pole, connected to the rest of the world by Iridium Extreme® satellite phones and buoyed by the global reach of the Iridium® network.

By using Iridium, the only network offering pole-to-pole coverage, racers will be able to connect with their family and friends back home throughout their journey. Team members will use their Iridium phones to share expedition photos, film video diaries, and post live updates to Twitter.

The participating racers are wounded former servicemen and women that are coping with a variety of physical and emotional injuries, scars, and amputations from serving in the line of duty. Funds raised from the race go to fortify resources for the re-training and re-education of wounded personnel.

As a sponsoring firm for the race, Arqiva experts will be on hand to provide expertise and help with any troubleshooting. Iridium is “…the only game for communications in Antarctica”, says Pete McCormick, Arqiva engineer and former Communications Specialist with the British Forces.

The journey is long and tedious. Teams aim to reach their destination, the 3° latitude of the South Pole, around the 17th of December. After months of intense training, both mentally and physically, have the racers are well-prepared for the challenges ahead. Armed with an Iridium Extreme, and fueled by extraordinary courage and determination, competing teams will fly to Antarctica and begin their expedition to the South Pole this month.

To follow along, find out more, support the walk with a donation, or sponsor a kilometer, visit: http://www.walkingwiththewounded.org.uk/southpole2013

Walking With The Wounded is a UK-based charity which funds both the re-training and re-education of wounded servicemen and women with the aim of helping them find long-term employment after they have left the Armed Forces.

Walking With the Wounded finances new qualifications, education and training programs for those who are injured, to help with career transition. This enables the blind, the burn victims, the mentally injured, the amputees and all the other wounded personnel to rebuild their lives and to return to the work place.

For more information about the charity, visit: http://walkingwiththewounded.org.uk

Credit: Walking With The Wounded