The Next Big Thing: AIAA and Iridium NEXT Mission Team Launch $250,000 Scholarship Endowment

Knowledge is the foundation of our industry. Without it we wouldn’t have satellites or cell phones. NASA wouldn’t exist. Nor would spaceflight or exploration. Iridium NEXT, a bold vision for a second-generation satellite constellation, would be a far reaching idea instead of an imminent reality. 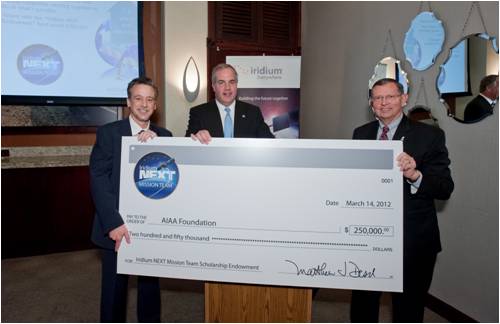 Our lives today would be vastly different without the benefits brought about by knowledge seekers who pushed the limits.

To underscore our commitment to knowledge and fostering education for the next generation young innovators, the AIAA Foundation recently announced the launch of a new program, along with Iridium and partners, which will award annual scholarships to the best and brightest aerospace engineering students across the world.

We’re working with Thales Alenia Space, SpaceX, Orbital Sciences Corp., Lockheed Martin, Boeing and SEAKR, who, in addition to Iridium, have committed almost half of the anticipated endowment. We anticipate the other 30 Iridium NEXT Mission Team members will be excited to participate as well.

The scholarships will be awarded annually to promising students, including those already engaged in the development of Iridium NEXT through Iridium or partner internships. Each year, scholarship recipients will form the Iridium NEXT Class of Scholars.

We are very excited about this program and will keep the Iridium 360 community up-to-date throughout the process. If you’re interested in learning more now, please click here.