Following an introduction at the Iridium Partner Conference 2012, the Global Alerting Platform (GAP) team at AWS and GTT Systems from the Netherlands have joined forces to take the GTTS-2000 Series Tracking System to market.

The Next Big Thing: AIAA and Iridium NEXT Mission Team Launch $250,000 Scholarship Endowment

To underscore our commitment to knowledge and fostering education for the next generation young innovators, the AIAA Foundation recently announced the launch of a new program, along with Iridium and partners, which will award annual scholarships to the best and brightest aerospace engineering students across the world. 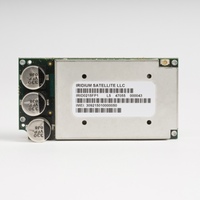 Often times, Iridium works behind the scenes as a catalyst for technological innovation. We provide products to our partners who then create new devices and solutions that change the way we communicate worldwide.

The Iridium® Core 9523 is a perfect example of this and, recently, we made it available for commercial use as part of our Iridium Force strategy. This is our unique vision for using the power of the world’s furthest reaching network to bring extended and enhanced personal communications to people and organizations, everywhere.

The launch of Iridium NEXT is less than 36 months away and we recently announced that we’ve passed a critical milestone in the process. We’ve completed the satellite preliminary design review phase.

To Iridium Partners: Thanks for the Spectacular Year

This week, we announced Iridium’s quarterly earnings results and I wanted to take the opportunity to update the community and thank our partners for their support. Exciting news has come out of the 2012 Miami International Boat Show for DeLorme and we wanted to share it with the Iridium 360 community. The inReach™ 2-Way Satellite Communicator won the National Marine Manufacturers Association (NMMA) Innovation Award for Consumer Electronics.

While Iridium satellite phones have been used by customers with Twitter since early 2010 through a separate Twitter Mail program, now it’s even easier. Twitter now directly supports Iridium as a mobile carrier, allowing Iridium satellite phone users to send tweets straight to Twitter using SMS. This means no more intermediary solutions and a simplified set-up.