How’s the Weather Up There? 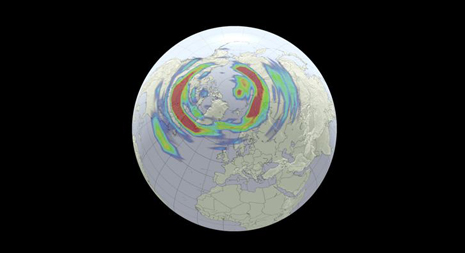 AMPERE measures electric currents during a small magnetic storm, intensifying as they move from the pole toward North America and Asia.

Awhile back, we posted a story about solar storms in space and the potential problems these weather systems could cause. When a solar storm reaches Earth, it creates a surge of ions in the Earth’s atmosphere, which can disrupt communications, satellites, navigation systems and utility grids.

AMPERE provides data in real-time every two to 20 seconds from each of Iridium’s low-Earth orbit satellites and the data are available within minutes for analysis. Through AMPERE, the space data is collected up to 100 times more frequently than it had been prior to using the Iridium satellites. These forecast capabilities allow scientists to locate where communications disruptions caused by solar storms are likely to occur.

Funded by a grant from the National Science Foundation (NSF) to the Johns Hopkins APL, AMPERE is an excellent example of combining scientific expertise with a commercial space provider to do basic science paid for by federal sponsors.