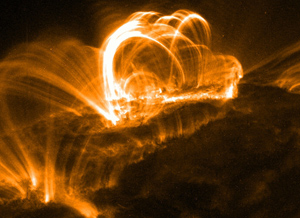 Solar flares are a hot topic right now and we can expect to see even more of them over the next few years.

They are caused by sunspots, where magnetic energy is built up and explodes off the sun with a force greater than several million hydrogen bombs. All that electromagnetic radiation then creates a “storm in space,” or solar storm, as it surges towards Earth.

When a solar storm reaches Earth, it causes a surge of ions in the Earth’s atmosphere, which can disrupt communications, satellites, navigation systems and utility grids.

Unfortunately, we are now approaching a high tide of solar storms. Sunspots have a predictable 11-year cycle of high and low activity, and the next peak will occur in 2013.

A few Iridium users have asked how these storms will impact our satellite service. After keeping satellites in orbit for more than 14 years, we can say with confidence that Iridium’s satellites are able to withstand these storms, thanks to their robust engineering and sheltered low-Earth orbit (LEO). LEO satellites like ours are more stable because the Earth’s atmosphere absorbs much of the solar radiation. Conversely, geostationary satellites are farther out and more vulnerable.

The engineers who designed Iridium’s satellites added extra layers of “hardening” against radiation exposure, as well as a high degree of on-board subsystem resiliency, fault detection, and isolation and recovery capabilities. The 66 satellites in Iridium’s constellation are also cross-linked to provide overlapping coverage of the entire globe, so even if a satellite is damaged our subscribers are likely to still have coverage.

As part of our financing for Iridium NEXT, we also conducted extensive research and testing to ensure the continued resilience of our new network, including resistance to solar storms.

You may be interested to know that Iridium is working with the scientific community to learn more about solar storms under a program called AMPERE (Active Magnetosphere and Planetary Electrodynamics Response Experiment). Iridium satellites are equipped with magnetometers to gather real-time data on magnetic fields in the Earth’s atmosphere. AMPERE allows scientists at Johns Hopkins Applied Physics Laboratory and the National Science Foundation to use this data for better forecasting of solar storms.